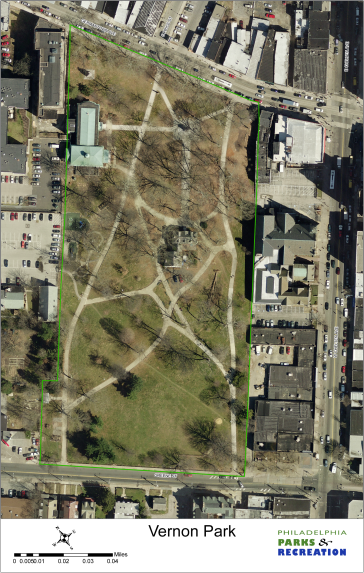 Friends of Vernon Park (FOVP) is a registered volunteer group within a larger Philadelphia Parks and Recreation (PPR) Friends network dedicated to advocacy, stewardship and community building through the City’s parks. FOVP organized in 1993 as one of the first three “Friends” groups in the city through a partnership between PPR and the Pennsylvania Horticultural Society (PHS). The first renovation to historic Vernon Park in the mid-1990s featured installation of a playground, fence and arbor entrances and a wonderful mosaic mural.

The impressive rain garden planned and designed by the Tookany/Tacony Frankford Watershed Partnership (TTF) in 2011 is one of the first of its kind in the city, and led the way for more widespread investment in ecologically sound and innovative stormwater management systems. FOVP was re-vitalized and re-organized in 2012, under the focused leadership of Ruth Seeley.

In 2013, Vernon Park was identified by Councilwoman Cindy Bass, PHS, PPR, the Fairmount Park Conservancy and the Philadelphia Water Department for a $1.2M green renovation which was completed in Fall 2015. Standout features are new lighting and state-of- the-art playground equipment, adult fitness equipment and new and renewed gardens. The Center in the Park, a community resource and activity center for older residents of Germantown and the Black Writers Museum, a resource-rich, community focused museum dedicated to the exhibition and study of Black Literature, occupy the historic buildings inside the Park, and are wonderful neighbors.

FOVP meets regularly the second Monday of every month in the Center in the Park and holds park clean-ups, special events, Bazaars and frequently co-hosts/supports Germantown activities by other neighborhood groups. Please feel free to join us at our next meeting—we welcome your ideas. Most importantly—enjoy Vernon Park, the Emerald of Germantown.

The park is on the west side of Germantown Avenue just north of Chelten Avenue. It contains a variety of buildings and monuments. The park also contains Vernon House, the Wister Mansion. The house was built in 1803 by James Matthews. A John Wister purchased it from James Matthews in 1812. His son, John Wister, was a member of Congress and lived in Vernon until his death in 1883. A statue of John Wister stands to the right of the entrance to Vernon House. It was erected by his great grandson, Jones Wister.

At one time part of the park was owned by Melchior Meng, a horticulturalist whose gardens were noted for their rare trees and shrubs. Melchior shared with his neighbor Kurtz a love for trees and plants. John Wister preserved and added to the collection while he lived here. Melchior Meng was one of the founders of Germantown Academy and during the Battle of Germantown in the Revolutionary War, his house was occupied by injured soldiers. The house was selected as a hospital because of the numerous barrels of vinegar in the cellar, used then to stanch the flow of blood.

There are also monuments to commemorate the Battle of Germantown and to the coming of the first settlers to Germantown led by Francis Daniel Pastorius. The Founders’ Monument is inscribed with the first documented protest against slavery in Philadelphia. The Center in the Park, a senior center, is also located in Vernon Park.

Friends of Vernon Park honors and acknowledges the stewardship, history, legacy, present and future of the Lenni Lenape (Leni Lenape, Delaware) people indigenous to the land we have come to call Vernon Park.

Read more about Vernon Park (and many other places) here: https://tclf.org/landscapes/vernon-park 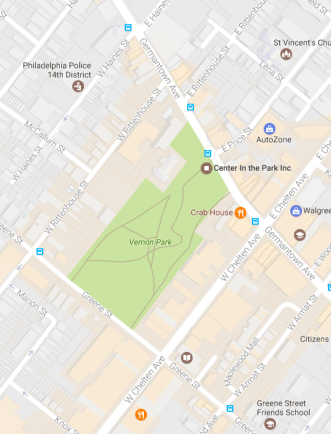